On April 9, 2021, the high-profile Balabala x Tmall Super Brand Day “Endless Dreams” Super Show was unveiled at Shanghai Children’s Art Theatre. On this day, Balabala launched three collections in collaboration with China Mars Mission, Suzhou Museum, and the renowned Taiwanese-Canadian fashion designer Jason Wu. These collections interpret the theme of “Endless Dreams” from different dimensions beyond time and space, such as flying across the galactic Universe, tracing the footprints of history, and upgrading fashion styles. As an industry-leading domestic brand, Balabala shoulders the mission of "empowering itself to enhance the image of Chinese brands". It is committed to helping realize the “Chinese Dream”, motivating children to explore their dreams with courage, and pooling the strength of all sectors of society to build children’s dreams together. Dream prelude: Land on the dream planet. Set sail for the dream journey

Dream prelude: Land on the dream planet.Set sail for the dream journey

To support every child to grow freely in dreams, exploration, and play and to encourage and help children to weave their dreams freely and realize them boldly, Balabala themed the show on “Endless Dreams”, releasing children’s innate curiosity and wild imagination. The event venue was equipped with a large number of soft-air film art installations, together with such visual technologies as laser, LED, and projection, to create a dream planet with overflowing childlike interest. Suspended plants and animals, strange alien bodies, dark and long cosmic passages ...... present a whimsical world of overlapping dreams. The three thematic scenes, namely, cosmos, national style, and modernness, are presented one by one, and the audience was amazed by the interaction. Through the space channel-like gentle slope, the main stage of the super show appeared in front of the eyes, with a 270-degree giant ring screen changing the remarkable space scenery. The audience felt like they were in a future spacecraft overlooking the mysterious planet in the center of the stage. “Where are we?” With a pure and innocent voice of a child, the super show officially began.

The mysterious planet presents the terrain of Mars, and Balabala X China Mars Mission took the lead. This collection drew inspiration from spaceflight in design, material selection, and craftsmanship. The designer uses light and airy organza to overlay through the virtual dynamic “Mars atmosphere”, chooses satin fabric combined with laser cutting to give the products a sense of changing light and color, applies shiny spherical decoration to shape the “Bubble Girl” in the outer space, and adopts “Mars rabbit” pattern to make the products livelier and more dynamic. 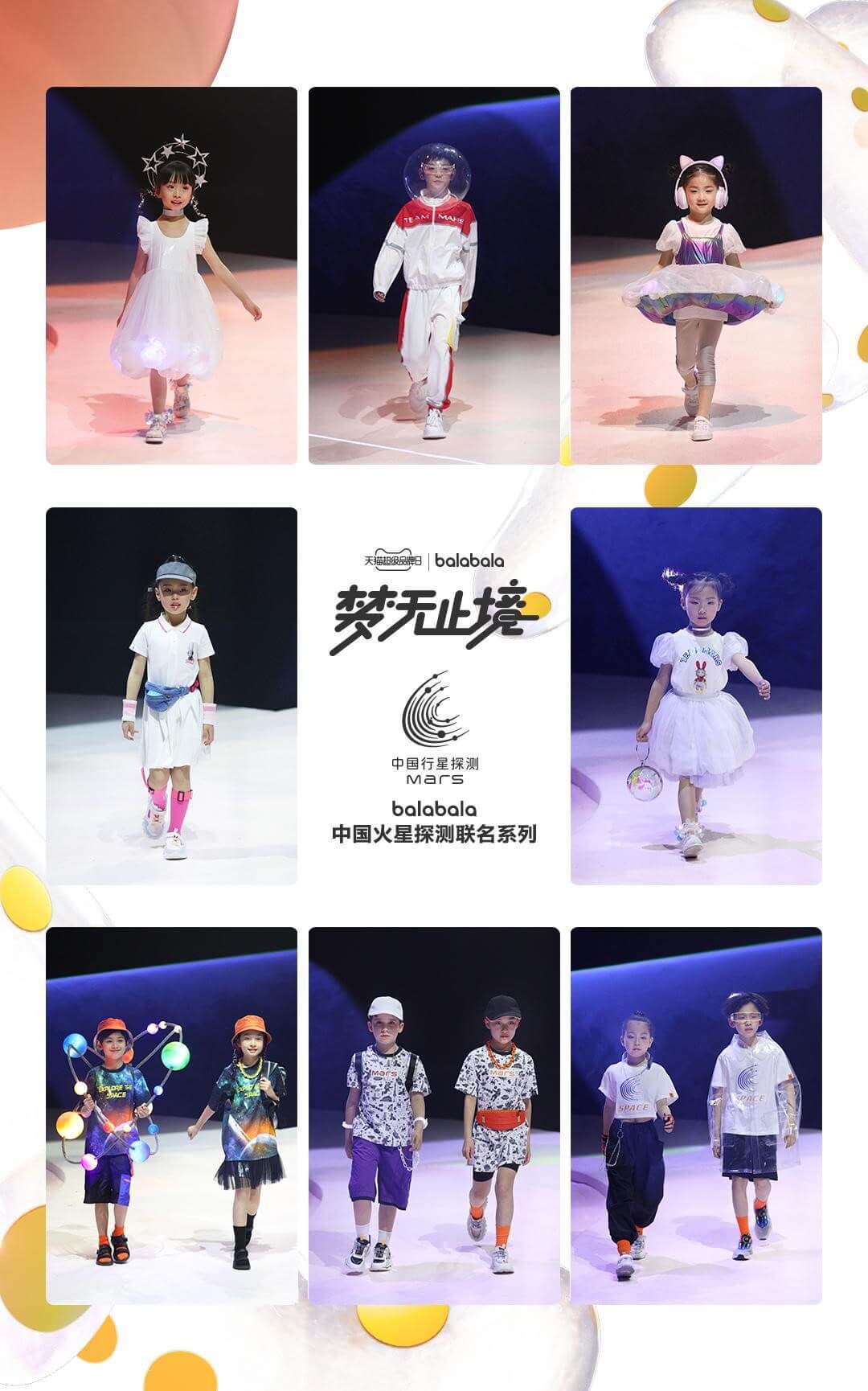 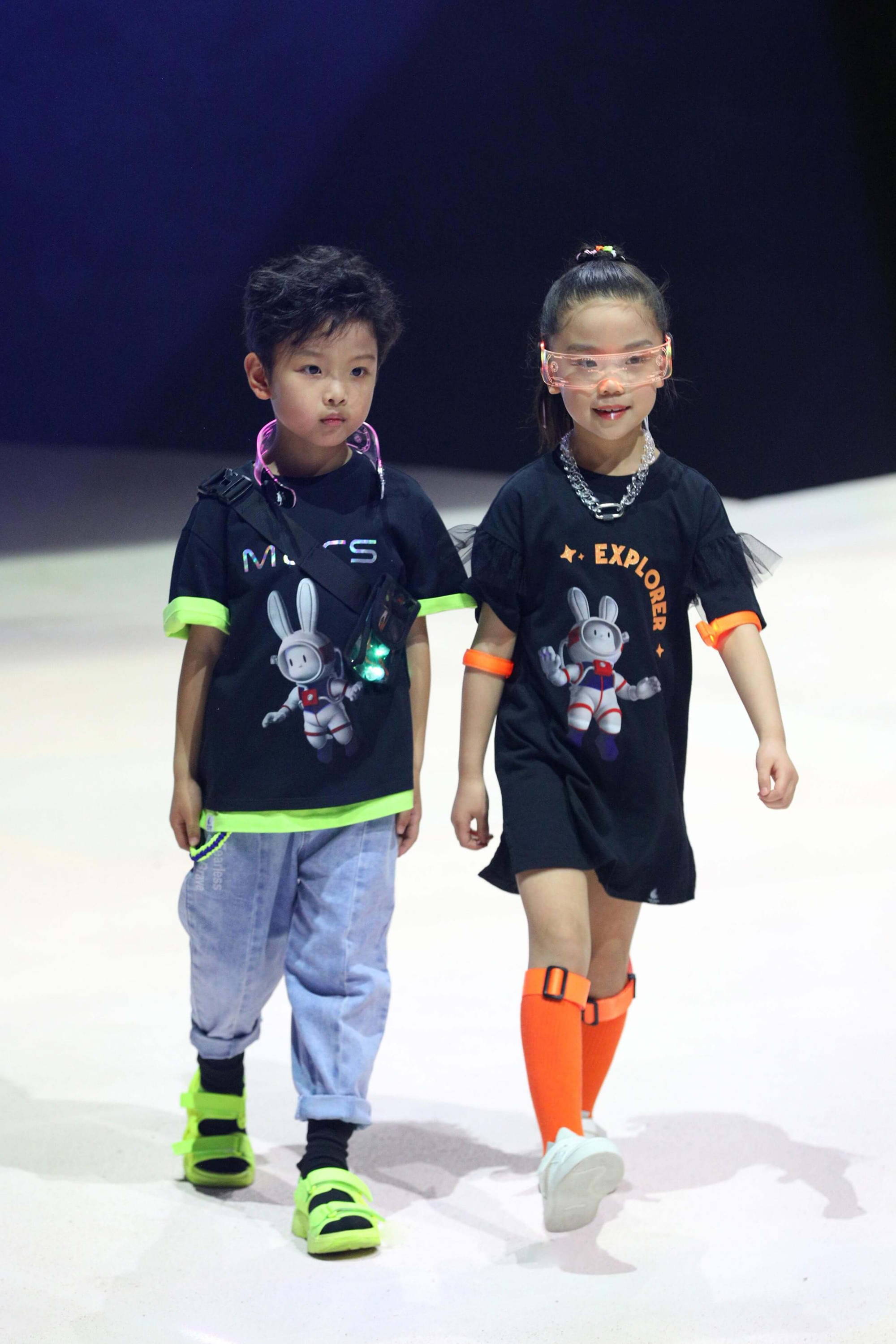 To light up children’s exploration dreams and enable them to fly farther and higher, Balabala, as an authorized co-brand of China Mars Mission, interprets the dream of Mars exploration with fashion and inspires the next generation’s interest in and love for the “space dream” of the motherland. We hope that children can grow up with the spirit of Mars exploration and bold pursuit of dreams.

As the mysterious planet travels through interstellar space and time, floating gracefully in the ancient charm of the regions south of the Yangtze River with stone bridges as well as white walls and black tiles, the Balabala X Suzhou Museum Collection made its debut. This collection draws inspiration from the many treasures in the museum’s collection as well as the architectural masterpiece of the museum itself by the master architect I. M. Pei. It incorporates the essence of two intangible cultural heritages, namely, Suzhou silk hand embroidery and velvet painting, complemented by modern techniques such as hand-beading. Such design combines the characteristics of Qing dynasty clothing with new Chinese clothing and is thus more in line with the wearing experience of kidswear. 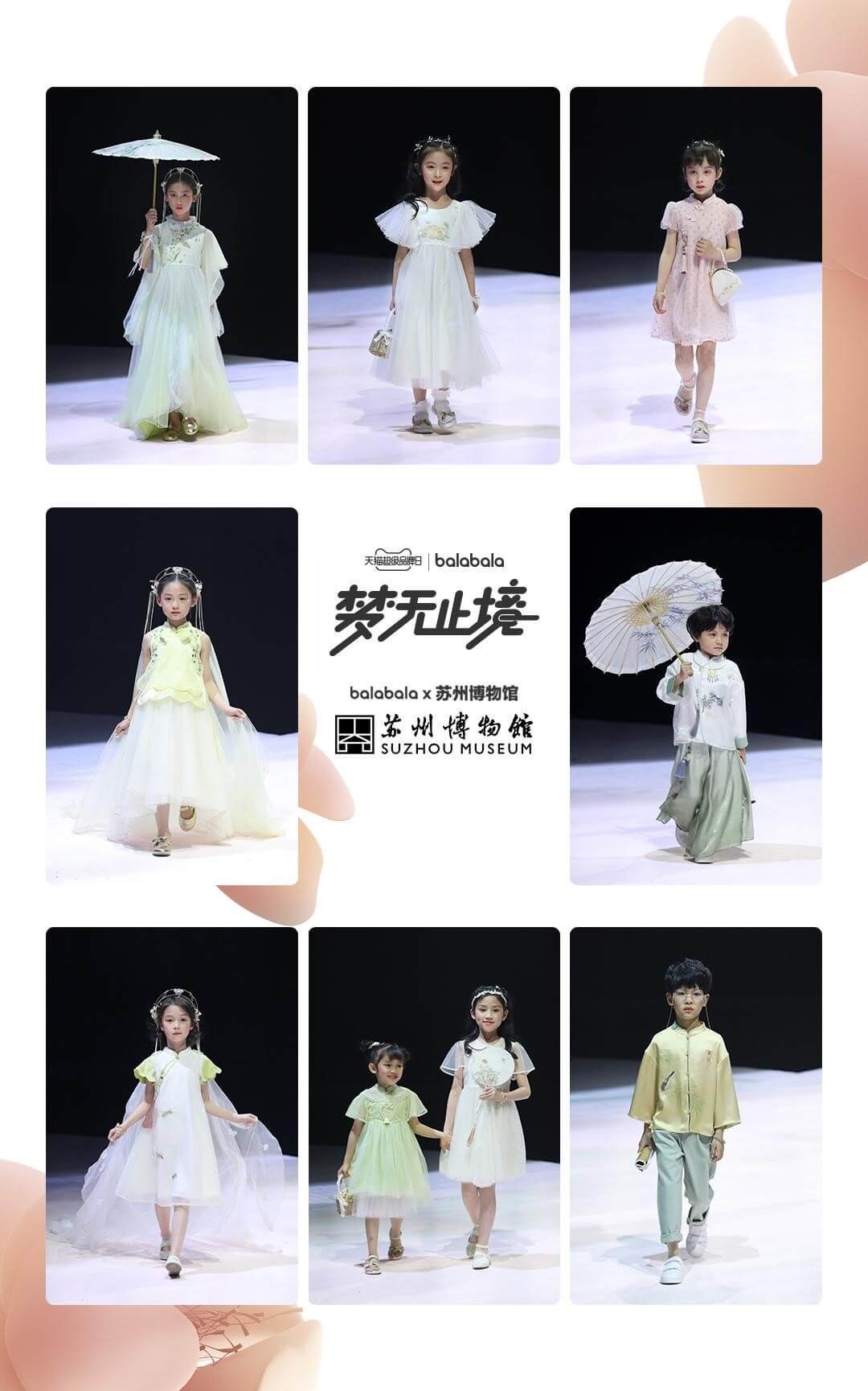 The Oriental Dream is far-reaching and vast, filled with endless beauty. The reason why the essence of folklore has been passed down for thousands of years is attributable to the examination, inheritance, and exploration of beauty by generations of people. With a sense of mission and a baton in hand, Balabala is dedicated to carrying forward the new style of the national trend with inheritance as the warp and innovation as the weft. It dares to be the protector, inheritor, and disseminator of the national culture.

After bidding farewell to the elegance of Suzhou Museum, the mysterious planet travels through time and space again, crossing the skyline of the cosmopolitan city when Balabala X Collection by the renowned Taiwanese-Canadian designer Jason Wu made its gorgeous appearance. The collection follows the JW 2021 spring/summer resort-style theme of “Escape Reality”. O-shaped chiffon skirts’ hemline is mixed with pure white feathers to create a romantic bird girl image. The T-shirt full of the prints of Balabala and JW logos looks unisex and cool. It appears sweet and trendy when matched with a patchwork embroidery mesh tower skirt. The black and white color scheme highlights the eternal classic. And the bright orange-yellow decorations enhance the sense of playfulness and popularity. 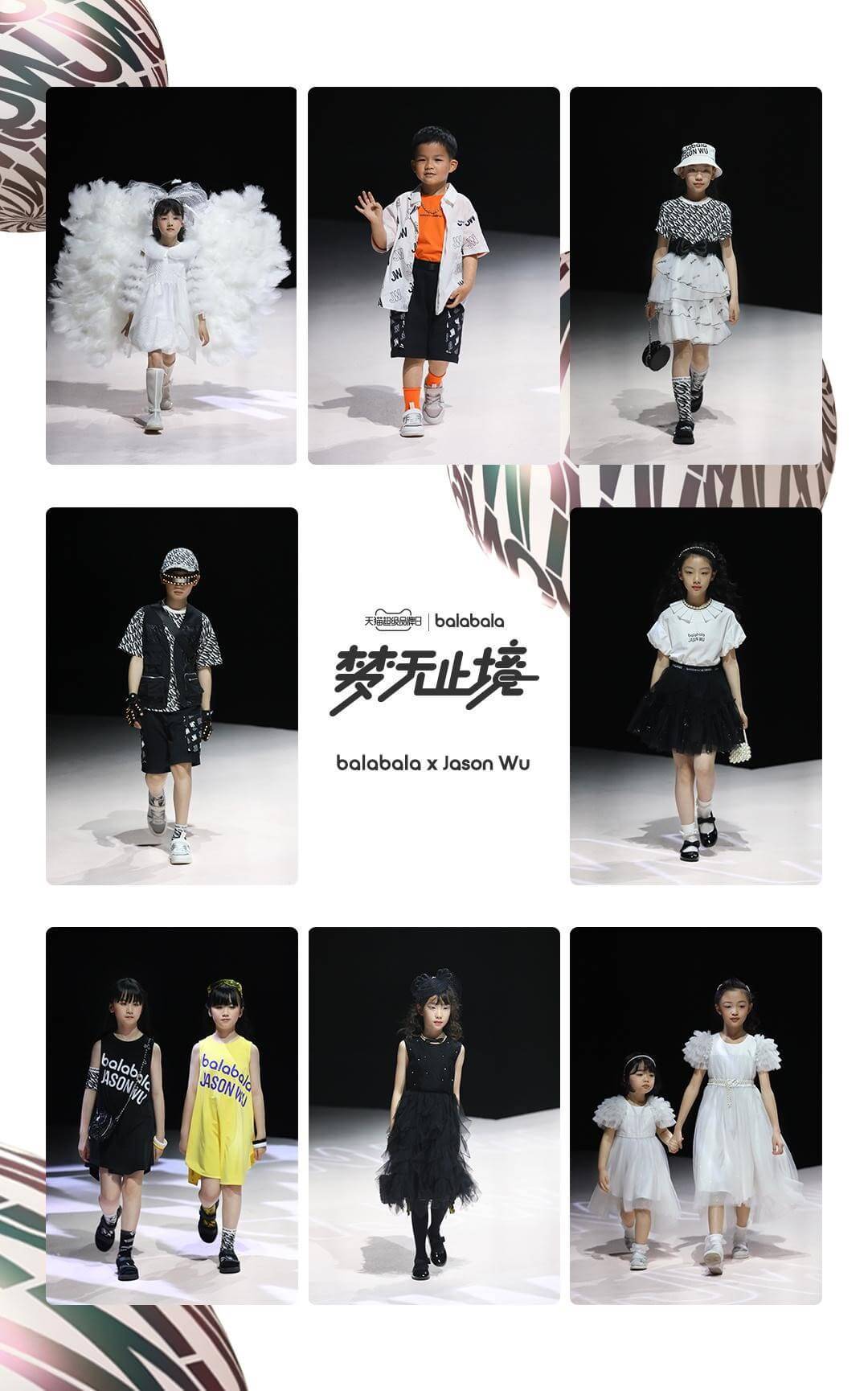 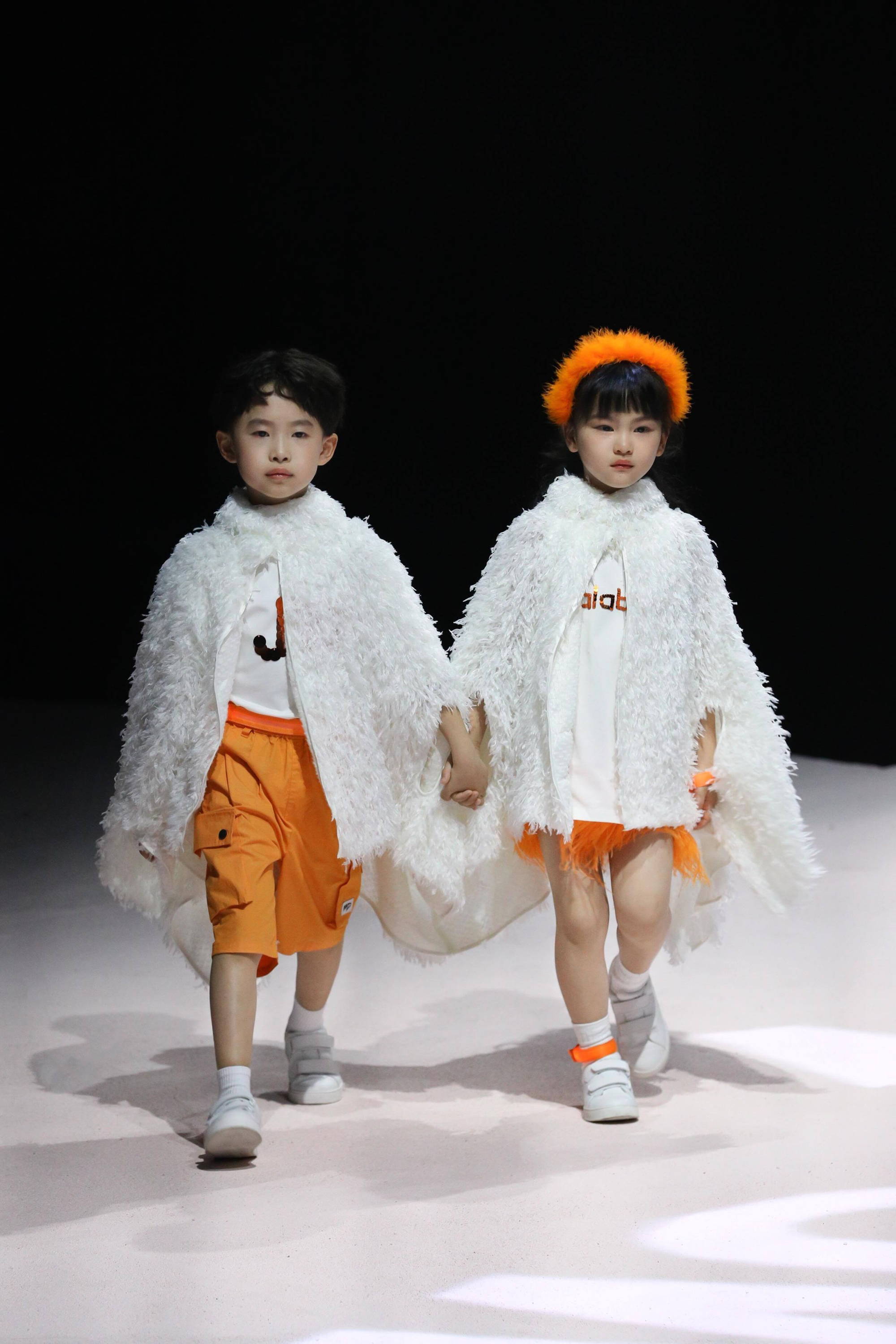 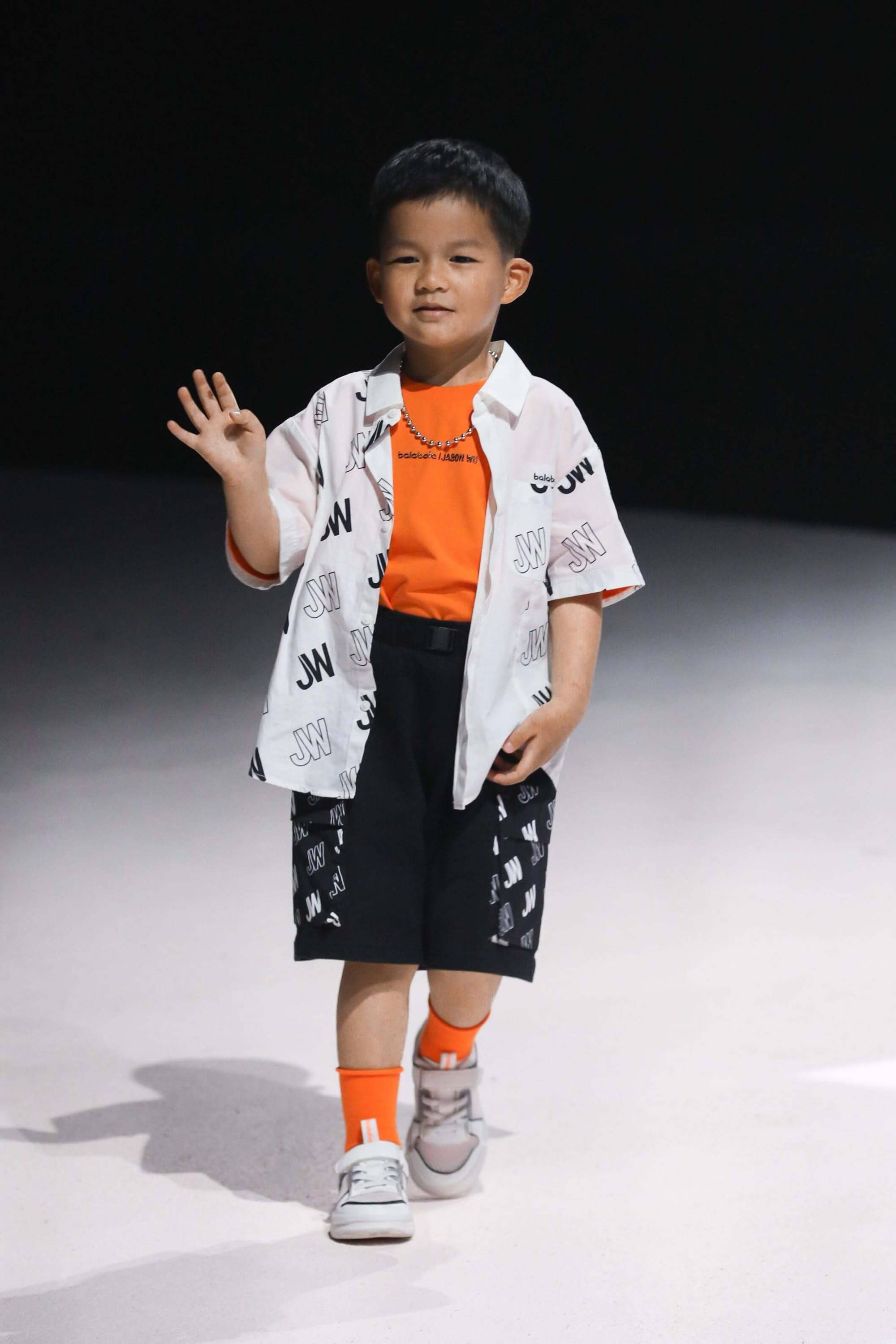 Through the “Endless Dreams” Super Show, Balabala has set new records for innovation in the kidswear industry in several aspects: The first cross-sector co-branding cooperation with three major IPs in the field of kidswear, the first KIDS WEAR · External Show during Shanghai Fashion Week, and the first all-age kidswear brand in conjunction with Tmall Super Brand Day.

Besides, this Super Show also attracted the attention and support of famous people from various circles. The family of the supermodel Emma Pei presented their runway debut to bring this show to a grand finale. “Rubik’s Cube Boy” Yiyang Yuhua walked on the Dream Runway, and a group of opinion leaders including the celebrity family Zhangyang Guoer and Barkley, the famous model hostess Li Jing and the famous stylist Chunzi brought their lovely babies to experience this immersive new-concept theater kidswear launch together. 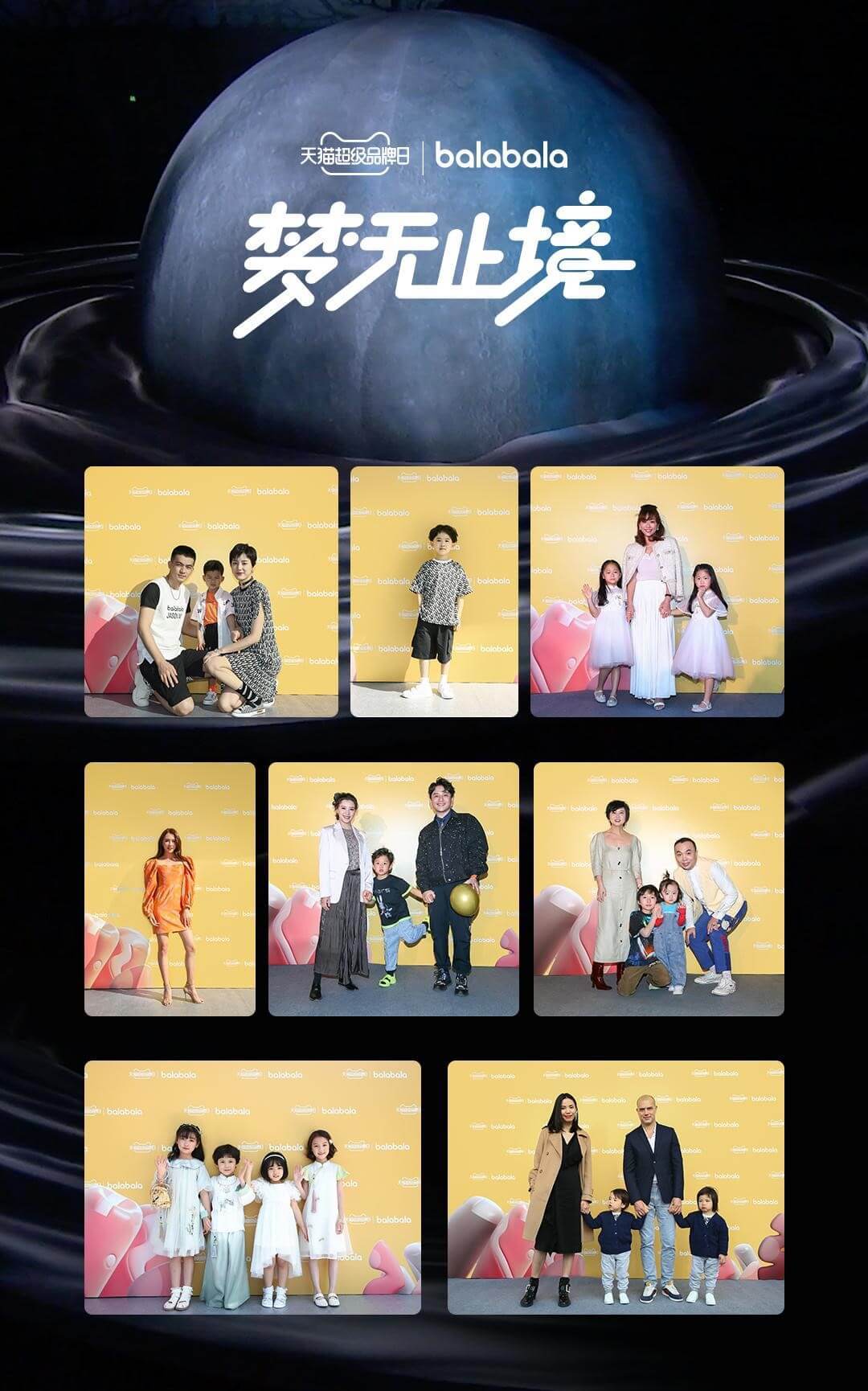 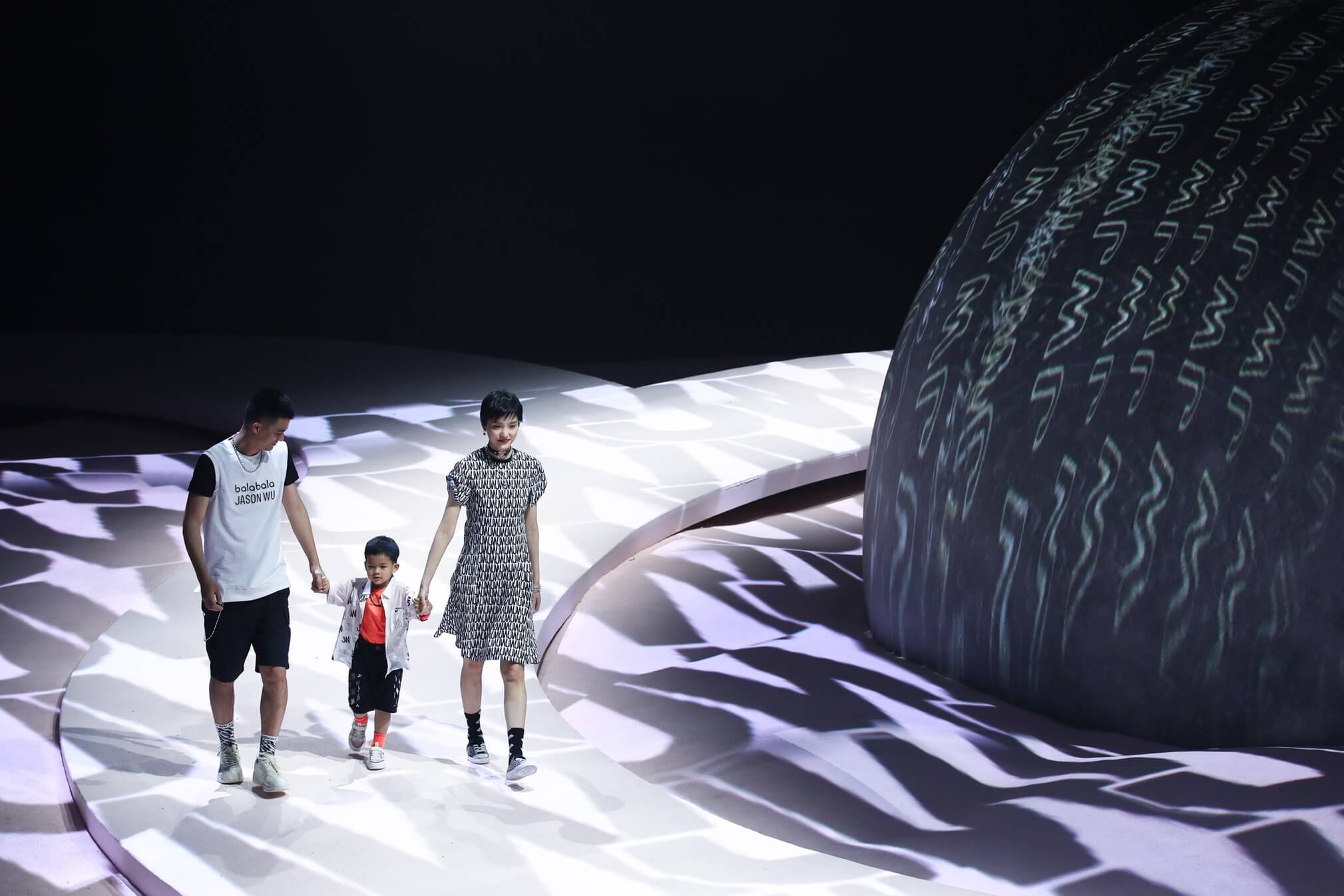 Besides, such leaders and guests as Mr. Xu Xingli, General Manager of Chang' E Aerospace Technology (Beijing) LLC of China Lunar Exploration Project, Mr. Wu Xiaolei, Deputy Secretary-General of Shanghai Fashion Week Organizing Committee, Budda, General Manager of Jason Wu Asia Pacific Brand, Lisa, General Manager of Tmall Mother & Baby and Sarah Howatson, Senior Director of Product Creativity of Balabala came to the scene and accepted media interviews from the dimensions of their respective field of expertise, such as aerospace, fashion, e-commerce, and internationalization. Sarah is from London, UK and has worked for many international fashion brands. This is her first work release since she took the lead as Balabala’s senior director of product creativity. This show tells a wonderful story of children’s dreams from an international perspective. 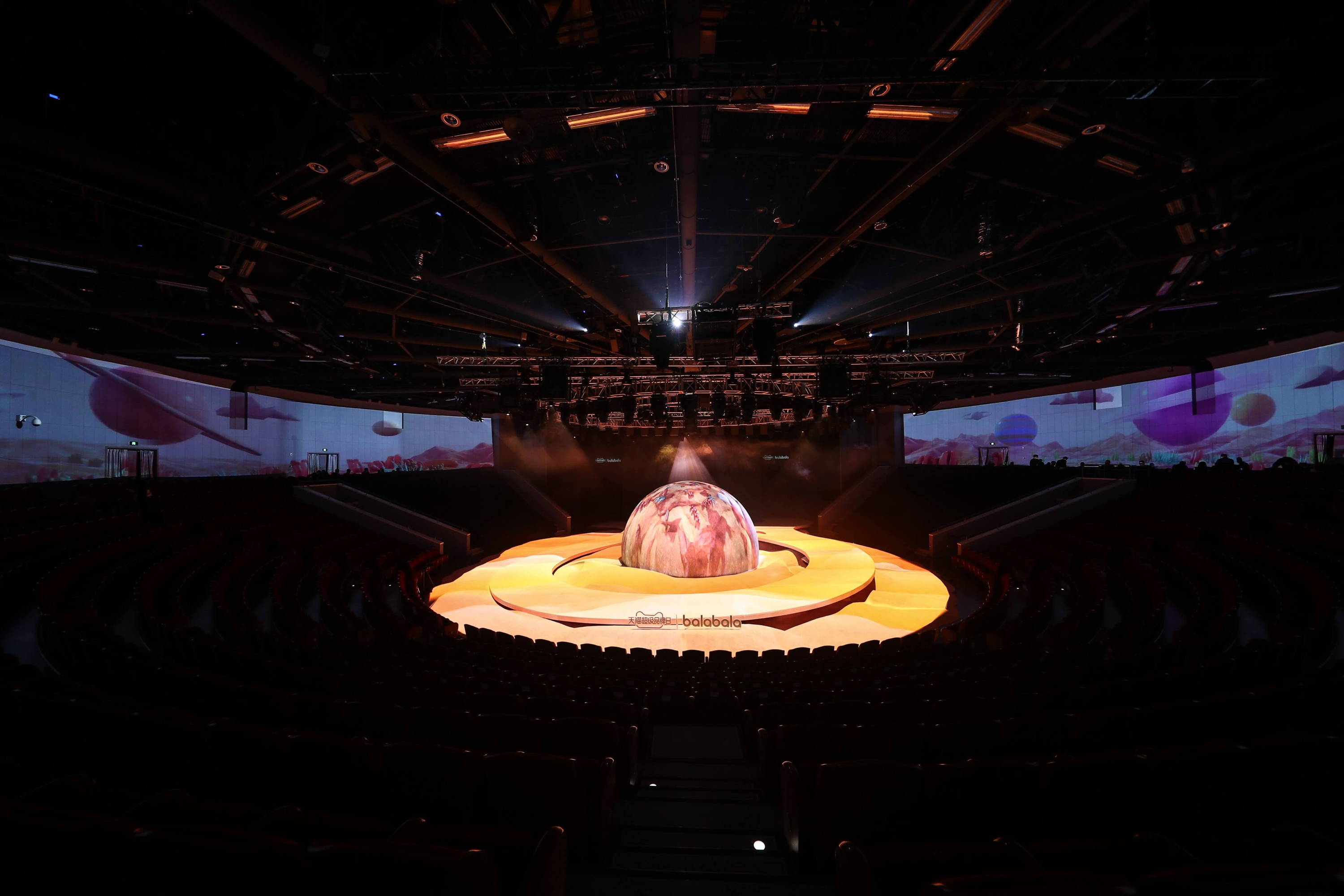 They are both the witnesses and the escorts of dreams. They expressed their appreciation for the brand, their support for Chinese products, their understanding of dreams, and their eagerness to protect children’s dreams in this grand “Endless Dreams” Super Show. 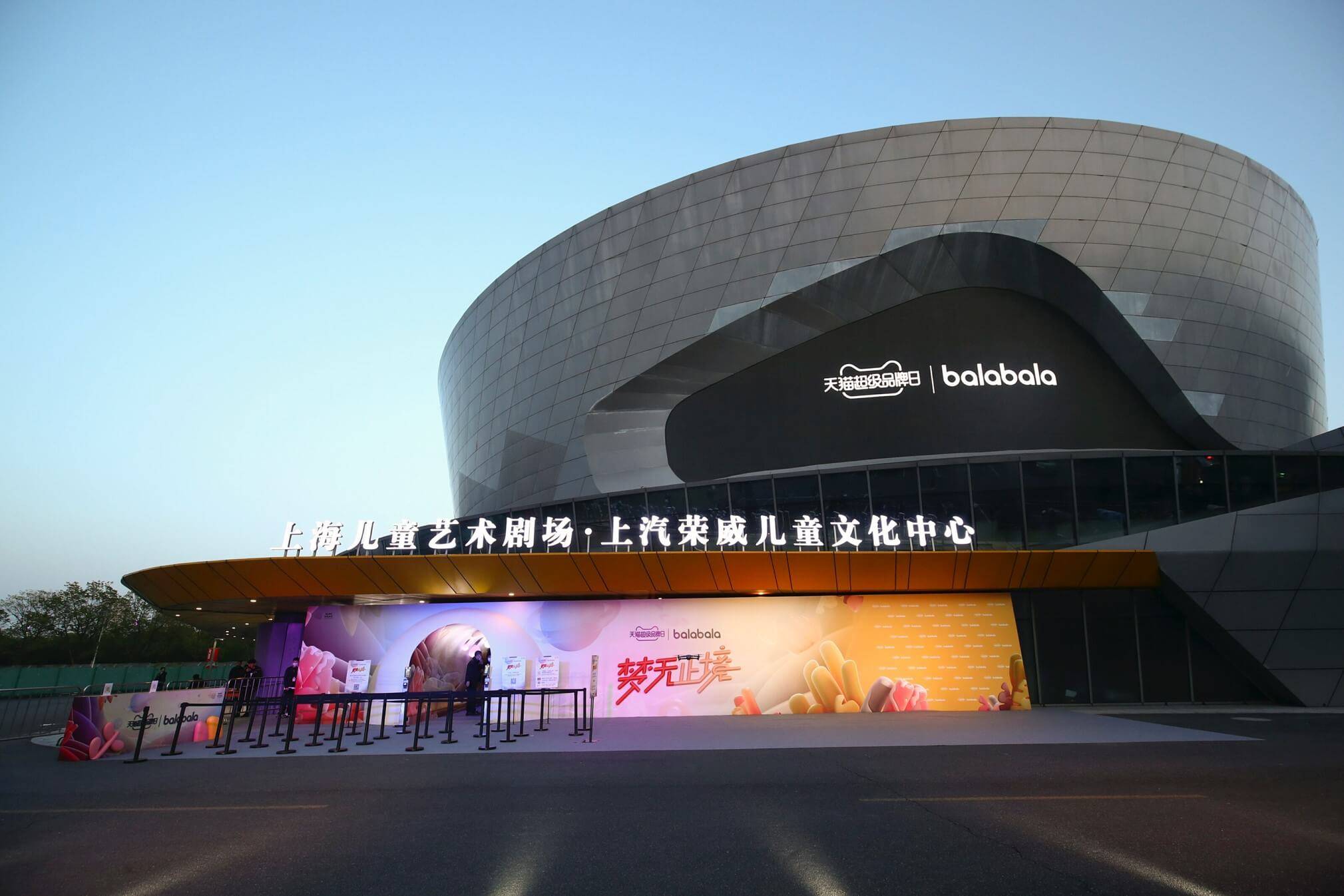 The mysterious planet will eventually return to deep space, but its inspiration to all people about dreams will never end. In doing anything, we must proceed step by step. We must work hard to march ahead in high spirits. Balabala is committed to not only helping realize the “Chinese Dream” with the fashion of Chinese products but also building children’s dreams with new products of national fashion, encouraging children to freely weave their dreams and boldly pursue them without fear of time and space. On behalf of many Chinese brands, Balabala has proved to the world with unstoppable momentum that “Chinese products should empower themselves to enhance the image of Chinese brands and that Chinese products have already built a strong image.” In the meantime, Balabala is calling on all sectors of society to protect children’s innocence and build children’s dreams together. The future is worth waiting for, and dreams are worth looking forward to. Children’s dreams are the future “Chinese dream”.

Shouldering the mission of love, Balabala is committed to creating a wonderful childhood for all the children in the world. Balabala grows with the new generation of families, providing children aged 0-14 years with quality fashion footwear, accessories, home furnishings, cultural and creative products as well as personal hygiene products. It enables children and parents to have the joy and reward of growing up together with diversified and quality products and experiences.

Enter your email and receive 10% off your first order.

balabala expands footprint in the Middle East and debuts in Qatar

balabala holds fashion show at the Great Wall of China